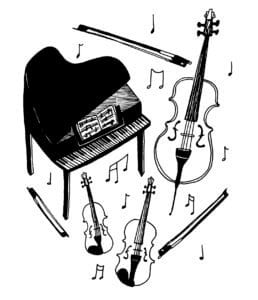 Last week, Ensemble Made in Canada, an established Canadian piano quartet, made an appearance at Mt. A, their second in recent years. Their visit to Sackville was part of their ambitious project entitled Mosaïque, an idea that began roughly three years ago and the results of which are currently coming to fruition through their cross-country performance tour.

The ensemble held two presentations last Monday as well as a performance of their special concert program on Friday evening. Students benefited from learning about the process of creating an innovative musical platform, as well as hearing new music that broadens the scope of the repertoire that a music student would experience.

“Their whole ensemble had such purpose and dedication to the project,” said Emily Steers, a fourth-year voice student.

The concert consisted of 14 short commissioned works by a variety of composers from across Canada, ranging from classical composers, to jazz musicians to singer-songwriters, with each work representing a province and territory. This allowed for everyone in the audience to be drawn to musical styles they were familiar with, as well as exposing them to new musical soundscapes.

“The pieces truly represented that which they were based upon,” said Justin Reid, a second-year trumpet student.

To add a fun and engaging twist, the audience was invited to draw on paper tiles throughout the concert, expressing anything that they felt related or connected to the soundscapes that they were hearing. These drawings will eventually be uploaded onto the Ensemble’s website to represent the collection of imagery amassed from across Canada in response to Canadian musical soundscapes.

The ensemble did an excellent job of captivating the audience immediately in the opening sounds of each composition: some pieces began in striking fashion with an immediate presence of fullness in tone and texture, whereas others began with very thin layers of sound before building towards climactic sections within the piece.

This project also recognizes the emergence of new Canadian music. The performance opened with a lively work by William Rowson, Short Variations on Waves. This piece, which Rowson described as “fast, fun and celebratory,” was inspired by paintings and pictures of schooner ships off the coast of Nova Scotia.

The themes of the different works revolved around elements of nature and cultural diversity, with a particular interest in water amongst the composers.

A number of the featured composers were inspired by nature, from the mountains in British Columbia to rivers throughout Canada, including the Great Bear River and the Red River. Great Bear River Blues by David Braid included lots of rhythmically active figures, showcasing his jazz influence, as well as unconventional playing gestures for the string members, such as slapping their left hand on the fingerboard. In Red River Fantasy by Andrew Downing, a spinning motion was evident in the piano, evoking  the continuous motion in bodies of water.

“Many of the pieces dealt with the idea of water in one way or another, thus it seems to be something that people think about when they think of Canada,” said Joseph Fitzner, a third-year trumpet student.

The concert ended with a piece called Blessing by Julie Doiron. Elements of the woods, sky and water embodied the nature surrounding us across Canada: a fitting end to the concert’s theme. The piece presented serene and beautiful melodies, with string pizzicato blending in with the piano texture leading the singable melodies.

Several students commented on how they enjoyed learning from this professional ensemble and witnessing an innovative project promoting new music in Canada.

“Students can see from this project how fantastic the Canadian music scene is, the diversity of styles and inspirations projects can take from, and how these initiatives promote Canadian artistry,” said Steers.

“The ensemble worked well together and complemented each other,” said Caitlin Strong, a first-year pianist.