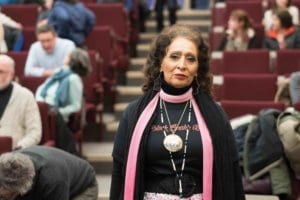 In a moving speech, influential activist discusses the repercussions of human activity

Tuesday, Feb. 8 was a night riddled with storm warnings. Most of the East Coast was completely shut down and there was a halt on most travel throughout the Maritimes – but the Wu Centre was packed. Community members and Mount Allison students and faculty walked into the largest lecture hall on campus to listen to LaDonna Brave Bull Allard speak. Librarian Mark Truitt mentioned that the school has been attempting to bring Allard to Mt. A for years now. Allard, one of the most influential catalysts for the protests of the Dakota Access Pipeline, told her story, and brought some audience members to tears.

“I am not an activist, I am a historian,” began Allard. During 2015 when the plans surfaced for the pipeline, Allard lived peacefully in her home near a Sacred Stone burial site in North Dakota, where her ancestors and the ancestors of her people have been buried for centuries. When the Dakota Access Pipeline, which Allard calls “the black snake,” became public, she realised she was the closest landowner. The project threatened to devastate her environment, which has belonged to Allard’s family for centuries. Allard had agency – she opened her land to the world and encouraged those who are against these plans to show their colours and stand up for their beliefs.

Thousands of people flocked to her land, setting up tents to weather the coming of the seemingly unbeatable billion-dollar company. “I am a mom until I die,” said Allard on why she opened her land. “It is the young people who stood up.… It is [they] who were able to touch the world.” The young men and women of the camp provided for the older members of the camp, and vice versa. When confronted by the military, as well as hired militia groups, they stood. Even when they were being brutalized by these groups, the camp was resilient.

After the pipeline was built, Allard kept standing up for her beliefs. She took her cause to the global stage, imploring nations to divest from their fossil fuel dependence. Allard remains humbled by the group that backed her, insisting that she is not a leader but that she was simply given the opportunity to act.

At the end of her speech, Allard said, “Invest in your own communities.” She implored the audience to take their money from big banks, which spread it throughout the world, and turn the money inwards so it has a more recognizable effect on your life. “Our world is changing,” said Allard. “We must stand up and clean our environment.… It’s about wanting to live.”

Allard said that sharing knowledge is of utmost important. For instance, Allard is currently involved in a project to make a trailer that costs about $6,000 and includes solar panels, a water reclamation system and other amenities that take the buyer “off the grid.” This project has been built and tested as a prototype, and is currently at the Massachusetts Institute for Technology being catalogued and tested for commercial use.

Following the presentation, a crowd of nearly 120 rose to their feet to celebrate and thank Allard, a person so courageous and humble that she both owned the room and shared it. “It was amazing to hear someone speak like that,” said Rebecca Estabrooks.