The long road to a contract 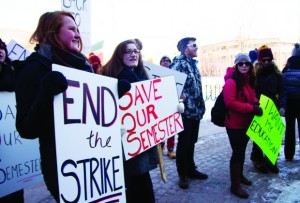 Even in the days before they were handed a new collective agreement by an arbitrator, the university’s faculty union and administration could not agree about some of the basic issues highlighted in, and the details of, arbitration. The split between administration and faculty led to the strike that knocked three weeks off last year’s winter semester and has marked the entire collective bargaining process lasting a year and a half.

“For us, the issues were money, but there were other issues that were really key around employer powers that would have significantly altered our working conditions. Those were really sensitive processes around tenure and promotion, sabbatical revue, intellectual property, and teaching evaluations,” said Loralea Michaelis, the Mount Allison Faculty Association’s president.

Karen Grant, Mount Allison’s provost and vice-president academic and research, highlighted a different set of issues for the administration, including the university’s bottom line.

According to Grant, a number of years ago the university made the decision to guide its decision process according to a model of intergenerational equity. In practice, this means that current students should not be benefitting from fiscal policies, such as deficits, which could potentially be harmful to future generations of students.

“This is an institution where we do have to be concerned about the bottom line; we have certain requirements about our ability to operate. We’ve got board policies that require us to run a balanced budget,” said Grant.

Tenure is a major point of disagreement between faculty and administration, not least because the two sides can’t agree on whether or not it was actually an issue during the bargaining process.

Michaelis said tenure was a contentious issue during negotiations before the strike, but Grant said that it was not an issue at any point.

“Tenure was never an issue. I’m not sure where that comes from. There was never any issue whatsoever with respect to tenure. Nothing. Ever. I’m not even sure what that reference would be to,” Grant said.

Debates about academic policies, or even which points of debate arose during negotiations, were not the only points of conflict. Michaelis and Grant offered irreconcilable views on the process of labour relations itself.

“I think labour relations are by definition adversarial, so a unionized workplace is a workplace in which there can be a degree of the employer testing of the resolve of the union and the union needing to show and muster its members to be able to respond appropriately.” Michaelis said.

Both sides were concerned about how a new collective agreement might affect Mt. A in relation to other universities. Maritime universities are no strangers to faculty strikes and labour disruptions. The strike of 2014 was the third faculty strike at this institution: faculty went on strike in 1992 and 1999. Elsewhere in the Maritimes, Acadia faculty went on strike in 2004 and 2007, the St. FX faculty in 2013 and the UNB faculty in 2014.

“Those proposals would have set us well outside the norm in the region. If the employer had won breakthroughs in our collective agreement, it would have been a significant breakthrough into the region,” Michaelis said.

A significant shift in labour relations at one university in the region could become a gateway for other universities or faculty associations to argue for similar proposals, or as the basis for a later arbitration decision.

The administration, on the other hand, took a financial perspective.

“There are lots of universities across the country that are deeply in debt, and we are not one of them. But that’s about careful, prudent management of our resources,” Grant said.

The administration’s main spokespeople during negotiations were Grant and Ron Byrne, vice-president student and international affairs. President Robert Campbell remained at a distance, primarily communicating through mass emails with the university community. This approach continued when The Argosy requested interviews for this article.

Grant and Robert Hiscock, director of marketing and communication, spoke to The Argosy on behalf of the administration. The communications department did not address the Argosy’s request to speak to Campbell.

“I think it’s fair to say that there have been some changes that have come down during the past few years,” said Andrew Irwin, professor of mathematics and former chief negotiator for MAFA. “Sometimes, the whole thing feels mysterious. Several different things went on at the same time in regards to what is the best course of action to take for our institution. I think it’s quite clear how we can improve [Mt. A]; we just have to work towards that,” said Irwin.

Michaelis has been taking notice of these changes, particularly during the bargaining process. “Employers have been resorting to more aggressive tactics. They push, they offer next to nothing as far as salaries are concerned, they table all kinds of proposals that would significantly change the balance of power between faculty and employer, and increase employer rights, and diminish employee rights,” Michaelis said.

While in most cases an eleventh-hour resolution is reached and potentially avoids strike action, in the instances of Mt. A and UNB, no eleventh hour resolution was reached. “There did seem to be a decision, on the part of both employers, to push matters into a strike,” said Michaelis.

“I’m not sure to what extent there is a purpose served in going back,” said Grant when asked about proposals which could have triggered the strike. “We had a strike, there were some differences, let’s see how those differences are resolved and let’s move forward. That is, I think, a much more positive way to go. It’s probably in everyone’s interest to focus on looking forward than to simply keep on looking back. I think the overwhelming majority of the members of this community are focused forward,” Grant said.

“Increasingly, faculty are seen as employees instead of independent workers,” said David Robinson, the Canadian Alliance of University Teachers’ executive director. “Faculty needs academic freedom to explore new fields. That academic freedom is central to the academic mission of the university. Employers are focusing on short-term results instead, where academic freedom is foreign.”

In May 2013, MAFA signalled its readiness to begin negotiations with the employer. By June 2013, the parties had exchanged their first proposals for a new collective agreement. After eight months of negotiations, on Jan. 27, 2014, Mt. A’s faculty and librarians took strike action. The strike lasted until Feb. 17, 2014.

“The decision to take a strike was a decision taken as a result of the realization that some of the transformative proposals that the employer had tabled were unlikely to be withdrawn,” said Michaelis. “A strike certainly does put a lot of pressure on students. It’s only with the greatest reluctance that faculty will leave class for the picket lines, but the issues that were at stake were so important to us that the long-term well-being of the university and the long-term interests of our members counterbalanced the short-term disruption of a strike,” Michaelis said.

When a strike vote was passed, 86 per cent of the faculty and librarians who voted opted to strike, a record high in the history of MAFA. Those who did not vote were counted as no.

A record low in the history of MAFA of those who did not support the strike went back to work: only seven faculty members decided to head back. And of those who went out on strike, no one broke the ranks. “We were very proud of our members, and they have every reason to be proud of themselves,” said Michaelis.

Dave Thomas, MAFA’s vice-president, saw the strike bring a strong sense of unity and politicization within MAFA’s membership. “Members that wouldn’t previously be interested in governance issues became aware and concerned for the first time. Going forward, I think we’ll continue to see a renewed sense of participation in collegial governance and a renewed sense of care and involvement in the governance of the institution,” said Thomas. “Many of the problems that led to the strike and the vote of non-confidence are still with us and are responsible for a continued feeling of unease. But once we receive the decision of the arbitrator and sign a new collective agreement, it should help bring a sense of closure. At that point it will become more apparent why it was necessary to do what we did,” said Thomas.

The new collective agreement presented to MAFA and the administration ends 18 months of bargaining, mediation, and arbitration. The agreement to arbitration brought an end to the three-week strike that punctuated the negotiations. The parties heard back from arbitrator Kevin Burkett on Nov. 18, but at press time neither would comment on the new collective agreement. The two parties held a series of meetings in August 2014.

“The two sides met over the course of a few days to clarify and to narrow the issues that were being considered at arbitration. This was done so that the arbitration would go smoothly, would be more focused, more clear,” said Michaelis.

Grant rather spoke of the  Sept. 19 hearing which took place in the presence of the arbitrator, where both sides presented their proposals before Burkett began his work.

“Over the latter part of the spring, [Campbell] invited members of the community to meet and to talk about matters of concern to them. There were also a number of one-on-one meetings held with faculty to hear from individuals about their concerns. Out of that process, the president took what he heard in those meetings and identified a series of priorities,” Grant said.

Grant identified the newly established Budget Advisory Committee as one of the initiatives to have come out of this consultation process. The committee is a way for the administration to provide greater transparency in regards to the drafting and the contents of the budget.

Oddly enough, engagement might be the place where the sides could find common ground.

“Out best hope was that regardless of the side that students took [during the strike], that they took the opportunity to think about the issues that were being raised; to think about the conditions of life at the university, and that universities that they are attending have become battleground,” Michaelis said.