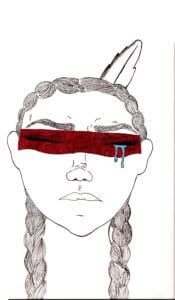 On Wednesday Oct. 25, red dresses were hung from trees around the Mount Allison campus as visual reminders of the racialized and endemic violence against Canada’s Indigenous women.  That afternoon, students and faculty members gathered in Mawita’mkw, a designated place of Indigenous gathering on campus, to hear social worker and Mt. A graduate, Lorise Simon, speak about the issue of missing and murdered Indigenous women.

Doreen Richard, the University’s first indigenous affairs co-ordinator and fellow Mt. A grad introduced Simon. Richard dedicated the event to Gladys Simon, Lorise Simon’s sister who was declared missing in 2004 and Chris Metallic, a Mt. A student who went missing on campus in 2012 and still has not been found.

Simon opened her talk by asking everyone in the room to say their name and why they came to this event.

She then outlined the history of Indigenous oppression in Canada, beginning with the residential schools that attempted to culturally assimilate over 150,000 Indigenous children. She noted that the effects of residential schools can still be clearly seen in the communities they targeted – some people are still trying to find lost family members and many are still trying to recover from the layered abuses they suffered.

Simon then spoke about the second wave of attempted cultural genocide by the Canadian government, the Sixties Scoop. In the 1960s, many Indigenous homes were declared “unfit” and their children were forcibly taken from their families and adopted into white families. “Some children were sent away as far as Australia,” said Simon.

Toward the end of her presentation, Simon talked about how the colonial introduction of the patriarchy forced women out of leadership roles and devalued the female gender both within their communities and greater Canadian society. Simon said that although female empowerment is on the rise, “[Indigenous communities] need more women leaders, positive leaders.”

In 1876 the Canadian government wrote the Indian Act in which they stated that an Indigenous woman would be stripped of her official “Indian Status” if she married a white man, consequently erasing her identity. The act also stated that if an Indigenous woman married a man from a different band than her, she and her descendants would automatically be of his band. The act was official policy written by the Canadian government that robbed Indigenous women of any individual power or worth. Those portions of the act were not amended until 1985.

Simon, Richard and several other women spoke during the discussion period about the Indigenous people they know whose deaths had possible foul play but were written off by police as “just another drunk Indian falling in the river” and not investigated. The Missing and Murdered Indigenous Women movement is a call to action, both for the police and for Canadian people. Indigenous deaths and disappearances too often go undocumented and uninvestigated.

Simon closed her talk with the sentiments that in a world where “it’s all about me and not about we anymore” it is important to remember that “people are medicine for other people, everybody is” and we must lean on each other.

In the discussion period following Simon’s talk, Paulette Steeves, assistant professor at Mt. A and Indigenous anthropologist/archeologist said, “I think it’s important for everyone here to realize that we have a responsibility to talk about this because that’s how we get to places where it stops happening.” Regarding the full room, Steeves said, “I’m so happy to see that you all are here and are interested and you can take your piece of it and move forward from here.”

The discussion also covered topics of corruption within the RCMP. Steeves said, “There are some very great departments and great people, but there is also a lot of toxicity too.” Another attendee who specified that she had been married to an RCMP officer called the RCMP a “scary organization” and wondered how activists get their voices heard while people like that are in power. Steeves replied that education is key, “the more groups that put pressure on [the issue of missing and murdered Indigenous people], the more people who are aware of it, the better it will be.”

Richards told a story about an RCMP officer who started flashing lights behind her on an empty road. She did not feel safe pulling over in such a secluded area so she waited until she could pull into a well-lit mall parking lot with other people around. When the officer asked her why she didn’t pull over earlier she replied, “I’m an Indigenous woman, just because you’re the RCMP doesn’t mean that I should feel safe.” The officer told her he was just doing a routine spot check. He had followed her for over 50 miles.

Mt. A student, Ashley Cummings said, “There is so much fear. No Indigenous person is unaffected by missing and murdered Indigenous women or residential schools, all these issues – they’re ongoing. Anytime I have to walk home alone at night all I hear in my head is that I’m three times more likely than most of my friends to go missing and seven times more likely to be murdered than most of my friends. It’s a fear that will loom in my mind forever.”

To learn more about these issues visit www.mmiwg-ffada.ca/