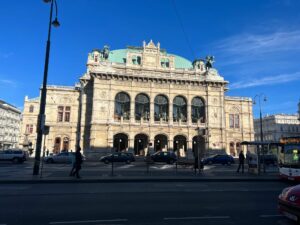 A week-long fever dream of a research trip

When a professor tells you that she needs research assistants to help her in the Vienna archives and will pay you in flight, accommodations, and food, you do not say no. In September, music professor Dr. Linda Pearse planned a nine-week research trip to Vienna to work on a book and blew my mind when she asked fellow third-year BMus student Kiran Steele and I to go assist her over reading week.

Two months later and a 40-day Duolingo German streak in hand, we headed off. I don’t think I had properly conceptualized the city of Vienna before this trip. I didn’t really know what to expect. I knew it was a historical city, and I knew the composers that were known for working there, but beyond a pretty forgettable Hallmark movie set there (read my review on The Argosy’s website!) and the Billy Joel song, I had no idea what the city would be like.

It exceeded every expectation. On the crisp November morning of our arrival, the sun shone down on cream-coloured buildings, flowers still adorning the occasional windowsill. People sat outside at café tables, the aromatic smell of coffee wafting through the air, tinged with tobacco smoke. Even the buskers in the street played classical music. I truly felt transported to some place that did not seem to exist.

The next morning, bright and early, we headed off to the archives. I could spend hours and hours in the Mount Allison archives (and highly recommend it), so spending all day in the Austrian national archives was a whole other experience. Each archive had a different system of organization and ordering sources. They ranged from dark wooden tables and bookshelves with green lamps on each desk and frescoes on the ceiling to clean lines of white tables with fluorescent lighting and glass elevators. We looked at music, war diaries, maps, and letters. Although I could not read the Old German handwritten letters, just searching for the right dates and feeling the wax seals from over three hundred years ago beneath my fingers was exhilarating. I think that anyone interested in history should spend some time in an archive. It really connects you to what you are studying, to the people of the past. There is something mind-boggling about the fact that I was looking at the same letters that were in the hands of an emperor. Additionally, during our sight-seeing time, a lot of the museums cited passages from an empress’s diary from the very archives we had worked in. It was terribly exciting to know I could have signed out those very same diaries.

The archive experience was not perfect. Our job was to search for sources, scan them, and upload them to Dropbox. Naturally, technology was not on our side, causing a few days of feeling quite defeated by the scanner app. Additionally, there was a kind of moral superiority that seemed to be afoot from the precision with which one followed the rules. Accidentally step into the bike lane, forget to clarify some information, or speak too loudly and it felt like someone would have your head. I suppose I might be a little harsh. I can just as easily chock up my difficulties to cultural differences I definitely had no grasp of.

For me, the highlight of the trip was seeing an opera in box seats. Opera is currently the career I’m pushing towards, and Vienna’s state opera is simply magnificent. I don’t think I stopped vibrating the whole time we were in the opera house. Beautiful marble staircases with green plush carpets, marble statues of muses, gold everywhere—I felt like I had stepped into a fairytale. The opera itself was amazing, playing with ideas of genre and self-seriousness. In North America, opera seems to legitimize itself by trying to appear as traditionally European as possible. Costumes and sets try to emulate some romantic era of days gone by. However, in Europe, operas are presented in a way that is often more conceptual and weird. After all, who is going to tell the Vienna State Opera that they’re doing the opera wrong when it originally debuted there?

This opportunity felt like something built specifically for me: archives, opera, food, history. I wandered the streets several nights, just taking it all in. It reinforced the feeling that I am doing exactly what I am supposed to do, and I will forever be grateful to the music department and Dr. Linda Pearse for this magical trip. I was meant to be in music, I was meant to be partaking in opera, and I was meant to be delving into history. And there’s a lot left that I hope to return to. Cue the Billy Joel.