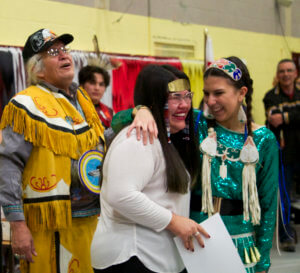 It’s been over five years since Chris Metallic, a young Indigenous Mount Allison student from Listuguj Mi’gmaq First Nation, disappeared one night after a party. The community searched for Metallic for months, trying to trace his steps from where he was last seen getting pizza. He has not been found. Sackville still bears scars from this time, including weatherproof missing posters which have become a fixture of the town.

Kiara Bubar, the current president of the Indigenous Student Support Group (ISSG) understands this tragedy is what created the group she now leads. “When Chris disappeared, there were a lot of students that felt quite lost within the community,” said Bubar. “They didn’t know where to go for support … and so the students decided to make a support group of their own.”

In this way, the ISSG is a reminder of Metallic’s disappearance. In the past five years, however, the ISSG has come into its own as a campus presence. “It’s basically a big friend group,” said Bubar. “That’s what a lot of the students need, especially Indigenous students coming from smaller communities to this big academic setting. What they need is a big group of people to say ‘We are here to support you.’ ” This support takes many forms, Bubar explained, such as “just getting together and talking, various activities, making crafts, going to sweats in Dorchester.… Having those connections is very helpful for the students.”

The group’s recent successes and impact have reached outside of the group’s membership and into the larger campus community. In the 2017-18 school year, the ISSG both organized and fundraised for the permanent installation and raising of the Mi’kmaq flag on campus. They also held the first Powwow on school grounds. Both events were resoundingly successful.

This stellar year was capped off with an award: the Mount Allison Students’ Union presented the group with the ASCAR for Club/Society of the Year. “It was so lovely to be recognized for what we’ve done,” said Laylia Bennett, one of the group’s co-presidents for the 2017-18 school year. “It was really great for our contributions to the Year of Indigenous Action to be so widely celebrated.”

What’s next for the ISSG? They’re bigger than ever and they’ve gained momentum, which is something they hope to maintain in the next school year. They’re already planning another Powwow. Bubar said she and Edmund Jay, her co-president for the 2018-19 year, are “already talking about what kind of stuff we want to do next year. We’re both so excited for what the next year will bring.”