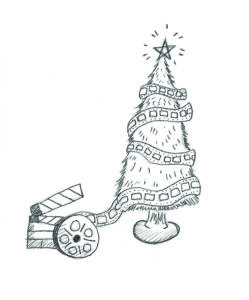 Gather ‘round children, bring your hot chocolate and cozy clothing, sit down by the fire, and let me regale you with tales of Christmas spirit. What better way is there to avoid talking to your family over the winter break or to stay inside when the cold wind blows than by watching holiday movies. There are the classics everyone rewatches: The Santa Clause, Home Alone, Christmas with the Kranks, and others. However, they can only be watched so many times. Then there are the Hallmark movies, but even though there are easily hundreds of them, they all feel like the same movie. The small town, the magic of Christmas, the muscular man in a knit sweater, and at the center of it all, the uptight female workaholic that “just needed to get away.” While these movies are enjoyable for a while, they quickly become tiresome. So, l took the liberty of watching some new and old holiday favorites to remind you of the good out there and spare you from the disappointingly average.

Hallmark movies are completely unavoidable during this time of year. I chose to watch three that came out this year to compare and contrast them. I am almost one hundred percent certain they just plagiarized each other. The plots are similar, the love stories are inevitable, and the character types are clones of each other. Each protagonist has a different career: one woman is a baker, the next a farmer, and the third a spy who must resist the charm of the prince she is sworn to protect. These were randomized movie selections, so perhaps it was the luck of the draw, but they were as plain as white bread. They were so predictable it was almost comical. If you want something new to watch but like routine, I highly recommend a Hallmark movie; any Hallmark movie will do.

The Santa Clauses is a TV show based on Tim Allen’s beloved Christmas film, and it is utterly underwhelming in its mediocrity. The only other time I have cringed so much was when I was looking at photos of myself from my pre-teen years when I thought I could be a scene kid (I could not). The original films are timeless. This show, in contrast, is like watching an old, white politician try to be hip to get the youth vote. The acting is forced, the characters are ingenuine and have stunted development, and it is simply not the same. At times it is hard to watch. The only thing pleasant about it is the guest appearances from the original cast and a wholesome elf marriage. Overall, it tries too hard to be what the originals were—good.

There are good remakes out there. A rarity, but they do exist. For example, Charles Dickens’ famous story A Christmas Carol has been remade countless times. Most notably, The Muppets have recreated Dickens’ story in period costumes so detailed that any costume designer would swoon. Bill Murray has done his own rendition too—Scrooged. Disney has remade A Christmas Carol in 2D (with Mickey and Co.) and 3D animation. The latter was a horrific CGI movie that surely gave some child nightmares. Most recently, Will Ferrell and Ryan Reynolds teamed up to remake the classic in Spirited, a musical version of the beloved tale. Truthfully, I think it is an imaginative retelling of the classic story. Spirited dissects and reinvents the narrative. Is it the most creative iteration? No. But it is different. Redeeming people becomes an operation with the dead running the show. Fun fact: the afterlife is a musical and I could not be happier about it. Will Ferrell is the Ghost of Christmas Present and a past Ebenezer Scrooge desperate to prove his worth and help the newest bad guy, Ryan Reynolds, for redemption. They make tongue-and-cheek references to other holiday movies and pop culture including Ferrell’s Christmas classic, Elf. The songs are catchy and I am pleased to report that both Ferrell and Reynolds can hold a note. It’s heart-warming and funny, it has a good cast, and hey, who does not love Ryan Reynolds? I highly recommend watching.

If not musicals, how about a delightful story about the origins of Christmas? Klaus is The Emperor’s New Groove for the holiday season, but instead of the protagonist being turned into a llama, he becomes a mailman. A truly underrated film that will tug on your heart strings and make you sad the movie has to end. The film is in traditional 2D animation to preserve the artform, but it is so different from any other movie done in a similar format; it is a love letter to animation and all of its lovers. In the movie, a town is divided into two warring sections, absolutely destitute and isolated. The people who live there include a schoolteacher who has given up all hope of teaching students and a man decimated by grief who makes toys for the family he never had. A depressing picture, I’m sure. Yet they are all brought together and change through little acts of kindness. Klaus has beautiful imagery and a compelling story that everyone should watch, whether they like animation or not.

Perhaps it is worth it to re-visit the classics, the films that never disappoint. The holidays are trademarked by tradition, after all. However, there are always ways to modify tradition, and watching these new shows is one of them.