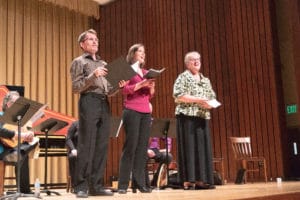 This past Homecoming weekend was more than just parties and football. Mount Allison’s Brunton Auditorium played host to many musicians specializing in early music as a part of the Sackville Festival of Early Music. The festival included performers, like the Toronto Consort, from all corners of the country. On Sunday afternoon, this ensemble, which consists of nine singers and instrumentalists, filled Brunton Auditorium with engaging music.

One of the more fascinating components of this performance was the plethora of 16th century musical instruments that were brought to the stage. Specifically, instruments such as the lute, harpsichord, baroque cello, recorder and hurdy gurdy. Many of these instruments had never been seen by current music students at Mt. A. “We’ve been studying these instruments in our music history classes, however few of us have actually seen them. It brings a new level to the education that we’re receiving,” said Bryenton Innes, third-year music major.

This specific concert paid special attention to works from Shakespeare’s Songbook. David Fallis, who led the group, took time before the themed sets to explain which of Shakespeare’s plays were being referenced in each piece. Each set was composed of three or four pieces that exposed themes prominent in Shakespeare’s work, such as love, madness, foolishness, tragedy and politics.

Third-year music major Isaiah Yankech went into further detail on how the music was performed. “The Toronto Consort did an excellent job conveying the featured works in a style that represented how Shakespeare’s plays would have been performed in the 16th and 17th centuries. The ensemble performed a diverse and engaging program entailing an intimate, responsive supporting cast of instrumentalists that enhanced the captivating text that the vocalists sang.”

The pieces in this performance came with their own unique style, mimicking folk songs from 16th century Europe. There were many humorous numbers, which added a light and fun ambience. In contrast, there were also many sorrowful pieces, which provided a stronger appreciation for the astounding tone and technique from the vocalists. Listening to this ensemble was a learning opportunity not only for vocalists in the audience but also for instrumentalists.

“I thought the group was very tight-knit in terms of their individual performances, as well as their performances as an ensemble,” said Innes. “They were able to share this intimacy with the audience, which is something not a lot of ensembles can do.”

The Early Music Festival brings more and more musical education to Mt. A each year. Not only does it provide a different musical setting for the community, but it also adds a new level of learning for students in the music department. The Toronto Consort was a huge part of this education through their own unique musical style from Shakespeare’s Songbook.