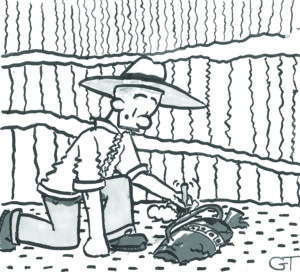 Netflix users at Mt. A might be aware of the release of Ancient Apocalypse, a reality television series hosted by well-known journalist Graham Hancock, who is primarily known for his involvement in pseudo-scientific conspiracy theories. The series released its first episode on November 11 and has since climbed on the Netflix trending list.

I started watching the series when it first came out and was surprised that this type of journalism would be broadcasted on Netflix. The series starts with Hancock speaking on why he is a controversial figure. He often mentions how archaeologists silence him because they do not want to change their perception on what is known about prehistory. He quickly frames himself as a victim who is being thwarted by “big archaeology.”

His primary argument throughout the series is that there was a big flood at the end of the last ice age that wiped out a very advanced civilization.

As he spoke, I repeatedly noticed his lack of reliable sources and his constantly unverified, vague claims. He often makes statements such as “little is known about this site” without giving specifics. In many cases, sites that he visits have had extensive excavation, but he is able to ignore that through his indistinct language. He often cites himself using clips from his episode on Joe Rogan’s podcast.

Even for my undergraduate history courses, this type of presentation of evidence would be unacceptable. If I wrote a paper where I cited mostly random obscure journalists and made intentionally vague claims, I would probably end up with a failing grade.

Netflix could have funded a series on the same topic that provided educational content made by specialists. Instead, they funded a series that primarily showcases conspiracy. It seems as if Netflix does not care about morality, but rather knows that shows like this will gain a lot of profit.

Conveniently, on November 15, Mt. A hosted a presentation through the VMCS speaker series titled “What Do Archeologists Do?” The presentation featured Dr. Ilaria Battiloro, a classics professor at Mt. A. Her speech centered on research done at an excavation site in Pompeii, where select classics students are able to work during school breaks.

“I don’t think the press does justice to what we do,” said Dr. Battiloro. She spoke on the common misconceptions about archaeology, why researchers look at certain sites, how they collect data, and what different data could mean.

She explained how the team at Pompeii was able to prove the time period of a site through the pottery found in the building remnants.

A group of students who participated in the Pompeii program then spoke about their experience on the trip and the research they did there.

The presentation demonstrated how detailed archaeological work is. You can’t just go to a historic site and make claims based on oral folklore or one non-peer-reviewed paper. It’s an intense process.

Archaeologists don’t do this thorough research to “gatekeep” information from the public; they do this to make sure they have sufficient evidence to prove their theories are correct.

Before falling into a conspiracy pipeline, make sure to question the sources you’re looking at. Many conspiracy theory giants are making profit off of their content. They are purposely trying to suck you in for their own gains. So be wary!