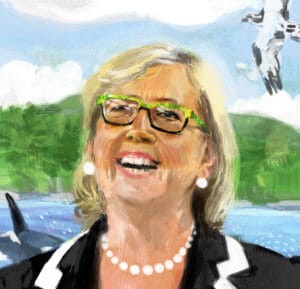 May visited the Memramcook-Tantramar riding to back Mitton and encourage people to vote for the Green party in the upcoming election. May said, “I’m here hoping to help [Green party provincial leader] David Coon and his team elect more Green MLAs because that will be healthier for Canada’s democracy overall and will certainly improve the quality of debate and democracy that takes place in Fredericton.”

May and Mitton held a reception at Cranewood on Main where members of the Memramcook-Tantramar community met with the politicians to discuss issues concerning Canadian politics and the environment.

At the reception, Mitton introduced May by saying, “Elizabeth May is a very intelligent, passionate politician and leader of the Green party of Canada. She is a great role model, and has strong values that I share.” She then said to May, “I am so excited to welcome you to my home province and my riding.”

May spoke about how current governments are approaching the climate crisis. “The consequences that we’re looking at if we fail are beyond most of what most politicians are prepared to talk about, largely because they don’t want to know about it,” said May. “It is a lot easier to ignore a large-scale threat if you keep yourself to sound bites and just enough change to get you through the next election. What we need are people who are actual climate leaders, who are prepared to say we need to do a whole lot more.”

May also spoke about the importance of young people’s votes in order to block corporate politics. “It’s time to give our young people reason to go out to vote on this campus. It’s important to share with people that democracy can work when we take it over. We have to take it back from corporate interest,” said May. “For a long time in New Brunswick, democracy has been a branch plan of the Irvings.”

Jasmine Tremblay is a first-year PPE student who attended the reception. “Seeing how passionately Elizabeth May advocates for sustainability through collective action and camaraderie was completely unique from the traditional notion of a politician and I found it truly inspiring,” she said.

May’s call to action resonated with Sackville local Laura Hunter as well. “It’s exciting to have Elizabeth May here, who really represents the values that the Green party has brought to the national conversation,” said Hunter. “I think that it’s really key to our future to be thinking about how caring for the Earth can be brought into conversations and decision-making around laws and finances.”

May left Sackville later that weekend, but the electoral process is ongoing. On-campus voting stations have been available in Gracie’s Café since Sept. 17, and will be active until Sept. 24.