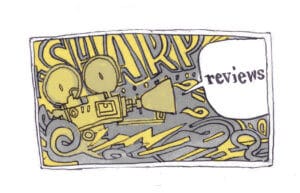 Have you ever seen a slasher flick? They all follow a fairly typical formula: Our protagonist (or final girl, as they’re known in the genre) is always a chaste Good Girl. She’s a better person than her friends because she’s a babysitter. Her friends are into sex and drinking. They die because they’re Bad People and she survives to the end because she’s nice. Not even the genre titans are immune to this: Halloween, the first slasher flick, is often cited as relying on this now-ubiquitous trope.

Happy Death Day rejects this and offers a new type of protagonist. Jessica Rothe plays Theresa Gelbman, or Tree. Tree is delightfully rude, into sex, and pissed that she’s being stalked by whoever is killing her. She is trying her damnedest to figure out their identity and why they’re so stab-happy. Tree, regardless of her silly name, is clearly a new type of final girl. While she is initially is abrasive, she soon reveals herself as infectiously charming, likable and authentic.

Furthermore, the movie has a ridiculously strong premise: It’s Tree’s birthday and someone keeps killing her. However, upon her death, the day resets and she wakes up in same dorm room (which belongs to a guy she doesn’t know) ready to die all over again. This adds to the genre in several fun ways. Firstly, it makes the mysterious slasher immediately threatening, as they’re consistently killing our protagonist. It also forces Tree to exert agency. It’s all too common for survivor girls to run away until they’re forced to face the killer. Tree, once she figures out what is going on, investigates and frequently confronts her murderer. It’s incredibly refreshing to have a protagonist this involved in her own story.

Despite the strength of Happy Death Day’s protagonist, the movie fumbles with much of its supporting cast. It doesn’t attempt to flesh out anyone besides Tree, and the relationships that she forms with the other characters seemingly come out of nowhere. However, I honestly didn’t find this to be a problem. In the place of character drama and relationship-building, Happy Death Day chooses to have fun. Tree is always doing unorthodox things to try to survive, and it’s enjoyable to watch her lash out at the killer and throw around profanities as she’s getting stabbed for the seventh time. When she’s not being killed, she’s trying to figure out what the hell is going on. I can see how this story could feel repetitive, and there are some long-winded sequences that don’t amount to much, but in the moment it’s fun and tense.

My biggest problem with Happy Death Day is that the final 15 minutes falter. The ending itself is great, but there are some last-minute character developments that are inorganic. Moreover, they’re ultimately unnecessary and irrelevant to the story being told, making me question their inclusion to begin with. They removed me from what should have been a happy moment and had me wondering if I had missed something (Spoiler: I hadn’t) when I should have been deeply involved in the onscreen action.

Happy Death Day isn’t going to be an iconic, genre-defining movie like Scream. It has several fairly minor issues which I haven’t mentioned yet: the slasher, while threatening onscreen, looks a bit dorky at first. The narrative is fun and inventive, but it still relies on some minor genre tropes, which can be frustrating. I admire Happy Death Day for its heart, confidence and overall inventiveness. It didn’t reinvent the wheel, it just made it better.